What's On The Horizon?

...or more precisely WHERE is the horizon? Or where should it be in a photograph?
An often asked question.
Simple answer: Not in the middle is the rule. Unless being in the middle works, which is breaking the rule!
Now that this is ‘clear as mud’ !!!....
The not-so-simple answer: If you draw an imaginary horizontal line across the top third and bottom third of the image and also vertically down the left and right third, you will end up with a tic-tac-toe (noughts and crosses) pattern. The horizon should be placed so that it is along either the top or bottom one of these lines.
If the sky area of your view is more interesting than the foreground, then have the horizon set to the bottom line.
If the foreground area is more interesting than the sky, then have the horizon set to the top line.
This allows the image to contain only those elements which each have their own appeal and attraction to the viewer. Remove any extraneous or uninteresting features.
See the following examples of the same scene.... 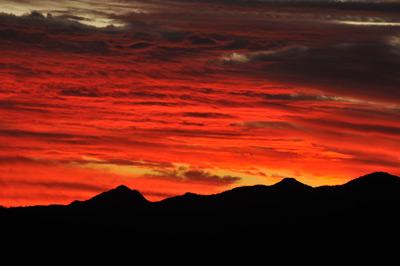 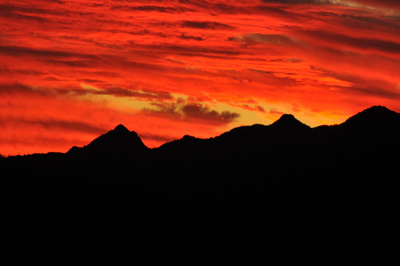 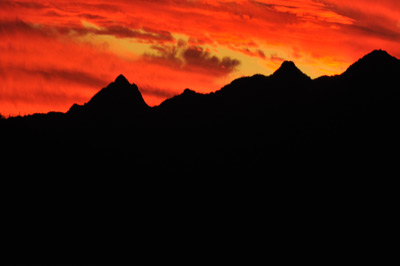 Changing the horizon line can change the dynamics of the images as can be seen at left.
Even though in the bottom image you may say the foreground is not interesting, the solid black line of the mountain is strong enough to convey interest and depth.
It would generally be considered that the middle image lacks strength and appeal as the horizon is midway.
A centrally placed horizon can work in situations where there is a reflection say of a mountain in a lake. This gives balance between the main feature and its reflection.
Practice this and see what works.
You will soon be able to quickly judge where to put that horizon!
Next
Previous